The 2018 CNS Census results are here!

CNSs are crucial to implementing evidence-based patient care, ensuring patient safety, reducing health care costs and much more. To best serve the interests of CNSs, as well as our health care system and health care consumers, we need to know about the demographics, education and practice of these advanced practice registered nurses. To that end, NACNS has launched a biennial census to collect that data.

The 2018 CNS Census is an update of the 2016 version of the CNS Census that was produced in concert with PhD nursing students at the University of San Diego, who helped refine the questions and reduce the amount of time required to complete the survey. Information on the results of the 2018 CNS Census will be published on the NACNS website and in the NACNS newsletter section of the Clinical Nurse Specialist: The Journal for Advanced Nursing Practice. 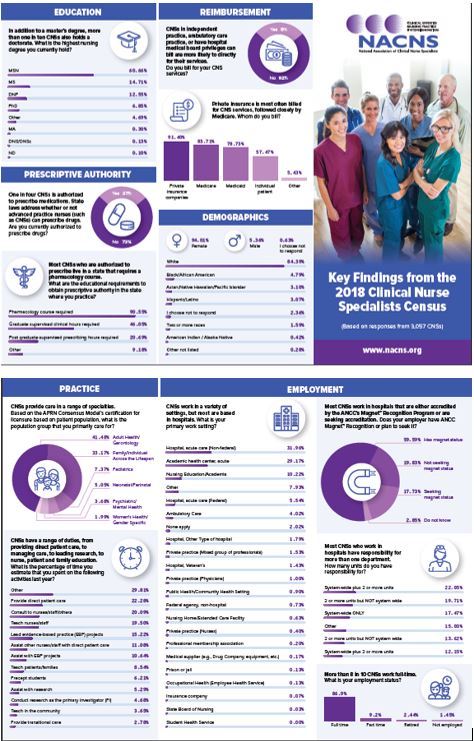 The second nationwide survey of CNSs, conducted by NACNS found that 3 in 4 clinical nurse specialists specialize in adult health or gerontology, most CNSs work in acute care hospitals that have or are seeking ANCC’s Magnet™ Recognition, more than half have nursing clinical-related responsibility for an entire health system, but only 1 in 5 CNSs are authorized to prescribe medications.

Title Protection and Prescriptive Authority
But the survey results also reveal issues that need to be addressed to allow CNSs to practice to the full extent of their education and training: title protection and prescriptive authority.

Reimbursement
Another issue highlighted by the survey findings is reimbursement. CNSs in independent ambulatory care practice, or who have hospital medical board privileges are able to bill insurance companies directly for their services, rather than through a third party, reducing insurance costs. According to the survey findings, only 6 percent of CNSs bill directly a third-party payor, like a private insurance company, Medicare or Medicaid, or an individual patient for the services they provide.

Employment and Demographics
The CNS Census shows that the vast majority of CNSs (88 percent) work full-time and 4 in 5 (80 percent) work in hospital settings. Of those, more than half (58 percent) have responsibility across the entire hospital system or system-wide. Others have a span of influence that covers one or two units.

The overwhelming majority of clinical nurse specialists are white women. But, the CNS Census was completed by more men and minorities in 2016 than in 2014. The survey also revealed that 2 in 3 CNSs are nationally certified and, in addition to a master’s degree, more than 1 in 10 CNSs also holds a doctorate.

The online survey was completed by 3,118 nurses who had completed or were enrolled in a CNS education program. It was conducted from June 1 to December 31, 2016. This is the second CNS Census, the first was conducted in 2014 and the findings released in 2015. More on the first CNS Census is available here. NACNS launched this comprehensive workplace survey to collect information that can be used to not only describe the population of CNSs but also to differentiate what CNSs do. The association conducts the survey every two years.

The Health Resources and Services Administration (HRSA) conducted its last national sample survey of the nurse workforce in 2008. Historically, policy-makers, health care leaders and others used the data from the survey to inform a range of health care policies and practices. To ensure this data is still captured, the National Association of Clinical Nurse Specialists (NACNS) and several other several national nursing organizations worked to gather this critical information. NACNS conducted the first-ever a national online survey of clinical nurse specialists (CNSs) from June 1 to December 31, 2014.

Among the key findings are that CNSs tend to be concentrated in adult care or gerontology, work in hospitals that have or are seeking magnet status, and are responsible for two or more units in a hospital. The vast majority of CNSs (85 percent) work full-time and 66 percent work in hospital settings. Of those, 44 percent have responsibility across the entire hospital system.

As a group, CNSs spend most of their time providing direct patient care (25 percent), consulting with nurses, staff and others (20 percent), teaching nurses and staff (19 percent) and leading evidence-based practice projects (14 percent).

The survey results also reveal issues that need to be addressed to allow CNSs to fully fill their role as advanced practice nurses who provide care to patients and ensure high quality, evidence-based, patient centered-care, such as prescriptive authority. According to the survey findings, only about a quarter of CNSs are authorized to prescribe medications.

NACNS’s online survey was completed by 3,370 nurses who had completed or were enrolled in a CNS education program. It is intended to provide a baseline understanding of the role of the CNS and how they are meeting the health care needs of the nation. NACNS will conduct the survey every two years. 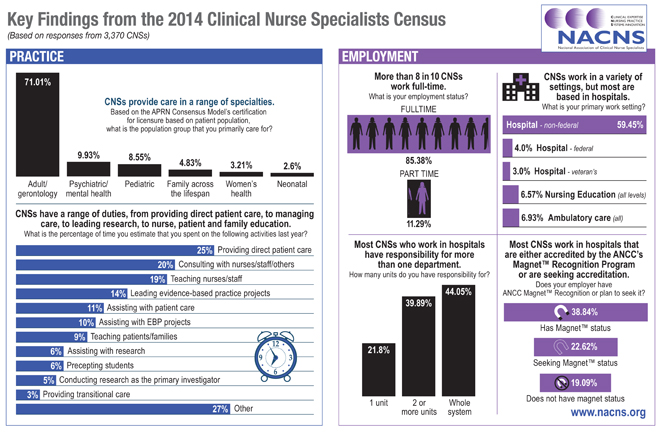 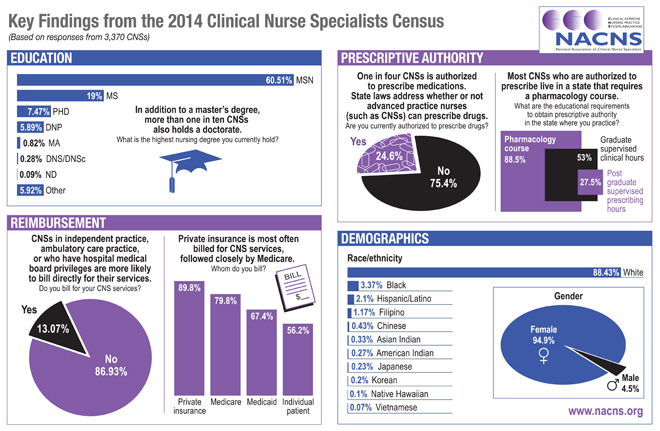